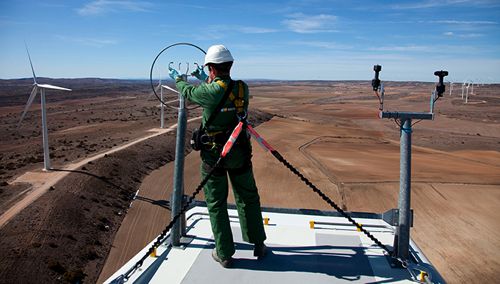 This article was produced by S&P Global Market Intelligence.

Renewables developers across Spain are rushing to complete wind and solar projects before a year-end deadline, but many are at risk of losing their government support by missing the cutoff.

Large utilities and independent project developers are racing to finish more than 8,500 MW of onshore wind and solar photovoltaic projects that were granted regulatory support through three auctions held in 2016 and 2017.

Some are now heading for a showdown with the government in a bid to keep a guaranteed floor price for the power they generate, as well as millions in deposits — both of which are set to evaporate for most of the assets if they do not start generating power by Dec. 31.

"The truth is many of them are having difficulties," Jorge Toral, a managing associate at law firm Linklaters in Madrid, said in an interview. "A lot of developers are pushing for the government to extend this deadline."

Toral has worked with several solar developers who won projects in the auctions and says both distribution companies and local authorities haven't been able to cope with the massive backlog of grid connection requests in Spain, causing months-long delays.

"They didn't have enough capacity to deal with all that work," he said. For project developers, it means that, "At the end of the day, it's not in their hands."

Favorable conditions for renewables and a loose regulatory framework have made Spain a hotbed for speculators, leading to grid access requests for dozens of gigawatts of unsubsidized capacity that may never get built.

Transmission grid operator Red Electrica de Espana S.A.U. has started to turn down many of the projects and the Spanish authorities are planning to crack down on the issue by tightening regulatory requirements. But meaningful action on the issue is hamstrung by political turmoil, with the fourth round of elections in as many years slated for November.

What will happen to a large share of the auction projects will be determined in the coming months. David Diez, a partner at law firm Watson Farley & Williams in Madrid, told S&P Global Market Intelligence that he is preparing to file a request for extension of the deadline on behalf of four wind developers with assets totaling roughly 900 MW.

He will argue that administrative delays, although part of the development risk, have spiraled so far out of control that his clients can not be held responsible.

In some cases, "It is clear that a delay in permits granted have directly affected the developer," Diez said in an interview. "We are talking sometimes with respect to permits where the regulator took more than one year or a year and a half."

Red Electrica, the system operator that needs to approve connection requests, did not respond to a request for comment.

Diez believes the ministry will likely not grant the extension request, or simply ignore it, and expects to take the matter to court at the end of the year.

The ministry did not respond to a request for comment on this story. But, in late August, it told one developer that the Dec. 31 deadline for exporting power to the grid was "non-extendable," according to an email seen by S&P Global Market Intelligence.

Most of the delayed projects were awarded in the two auctions from 2017, since a smaller number of wind and biomass projects tendered in 2016 have a longer deadline until March 2020.

Wind farms are facing bigger problems with the deadline because they typically take longer to realize than solar parks. Non-utility companies and smaller developers are also disproportionately affected by the issue, according to several industry sources.

Enel SpA subsidiary Endesa SA and Naturgy Energy Group SA said they expect to finish all work on their projects by year-end. The two utilities won 879 MW and 917 MW of wind and solar projects, respectively. Other utilities, including France's Engie SA, which won only 50 MW in the auctions but has acquired stakes in other projects, did not respond to a request for comment.

Some of the biggest winners in the auctions, with just over 1,500 MW each, were Cobra Concesiones SL, a subsidiary of construction firm ACS SA, and Forestalia Renovables SL. Neither responded to a request for comment. Some projects have also changed hands, with Forestalia selling a portion of its pipeline on to Copenhagen Infrastructure Partners K/S earlier this month, for example.

According to one lawyer, some projects have already lost money by missing project milestones, which means they forfeit their right to reclaim parts of the bid bonds they paid in 2017. The mechanism is designed to deter developers from walking away from their projects.

In addition, if developers opting to use project finance miss the commissioning deadline and do not get an extension, they could lose part of their financing or be forced to find a direct offtaker to sign a power purchase agreement to replace the guaranteed income, an alternative that some banks allow for in their contracts, according to Diez.

For some, the looming showdown over the projects and its potential consequences are raising uncomfortable memories of the Spanish renewable market almost a decade ago, when retroactive cuts for subsidy payments triggered an investor exodus.

"It may be the case that if an extension is granted, this could be potentially regarded, especially outside Spain, as another change in the regulation," said Tomás García, managing director for solar and wind projects in Spain and Portugal at BayWa r.e. renewable energy GmbH.

García, whose company did not participate in the auctions, fears that even the threat of lawsuits over the issue will harm the renewables sector in Spain.

"At the end of the day, we're giving an image to the outside that we, as an industry, probably don't want to give," he said in an interview.

On the other hand, some are arguing that punishing the developers, despite good-faith efforts to complete their projects, could similarly cause further damage to Spain's image with international investors. It could also risk making a dent in ecological transition minister Teresa Ribera's ambitious renewable energy targets.

Manuel Cabrerizo, a partner and co-founder at Voltiq, a renewable energy financial advisory boutique, said at the end of the day, both the developers and the government are pulling on the same rope.

"I think the government will be adamant not to harm them too much, particularly given the history of renewables in Spain," he said. "I don't think they will take a hard line towards delays."